Original story from Max Delbrück Center for Molecular Medicine and the Berlin Institute of Health. 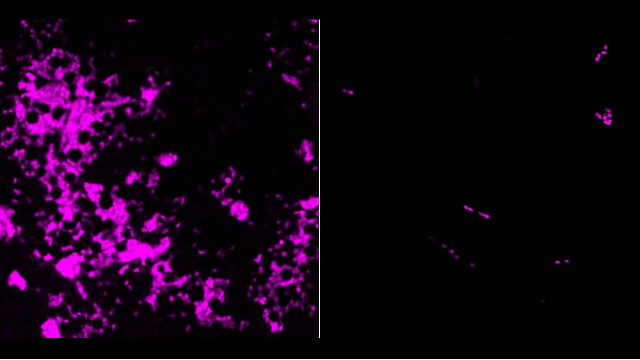 A microscopic image of tumor tissue under the influence of TNF (left) and IFN- γ (right). Red blood cells are pictured in a magenta color. TNF bursts the blood vessels and releases large amounts of blood cells, whereas IFN-γ lets vessels retreat.

Immunotherapy with T-cells offers great hope to people suffering from cancer. Some initial successes have already been made in treating blood cancer, but treating solid tumors remains a major challenge. The signaling molecule interferon gamma, which is produced by T-cells, plays a key role in the therapy. It cuts off the blood supply to tumors, as a new study in the journal Nature reveals.

The immune system is the body's most powerful weapon against diseases. So what if it were possible to use the immune system to fight cancer? For a long time now, researchers have been trying to do just that - for example, by employing a special kind of immune cell called T-cells. They are "special mobile forces" that - after undergoing training - patrol the body, and can seek out and kill cancer cells. This strategy has been successful in initial clinical trials - but mostly just in the treatment of cancers that do not form tumors, such as blood cancer.

Good at fighting blood cancer, but not so effective against solid tumors:

Large solid tumors, on the other hand, sometimes pose big problems for T-cells. Though adept at targeting cancer cells swimming in the bloodstream, they have difficulty attacking compact tumors. The tumor weakens the aggressors through the delivery of inhibiting signals.

In a study published in the journal Nature, they investigated how the signaling molecules of T-cells affect the immediate tumor environment, which includes the connective tissue as well as the blood vessels that supply the tumor.

T-cells produce not only tumor necrosis factor (TNF) but also the molecule interferon gamma (IFN-γ). Until now, however, there has been little understanding about how IFN-γ really works. "We knew that IFN-γ attacks cancer cells via the tumor microenvironment," says Kammertöns. "We now wanted to find out exactly which cells are targeted by the signaling molecules."

The researchers generated genetically modified mice and used a clinically relevant cancer model. This included animals in which only blood vessel cells were susceptible to the signaling molecule.

In this mouse model IFN-γ pruned back the blood vessels in the tumors, thus shutting down the supply of oxygen and nutrients and killing the tumors. The researchers were able to observe this process microscopically in living mice in fine detail. They found that the blood vessel cells alone responded to the signaling molecule. When the researchers targeted other types of cells with IFN-γ, the tumors continued their growth.

These findings provided an explanation for the molecule's powerful properties, which were already well known. "IFN-γ is one of the most important weapons in the T-cells' arsenal," says Thomas Kammertöns.

Thomas Blankenstein, lead investigator of the study, says: "The two together - IFN-γ and tumor necrosis factor - are a powerful team. TNF bursts tumor blood vessels, thus opening up the tissue, while IFN-γ cuts off the blood supply and keeps the tumor at bay over the long term."

"IFN-γ might also affect the formation of new blood vessels after strokes or heart attacks. That's why we want to find out more about the molecular processes behind all of this."

This article has been republished from materials provided by Max Delbrück Center for Molecular Medicine and the Berlin Institute of Health. Note: material may have been edited for length and content. For further information, please contact the cited source.